L.A. rock band Classless Act is hitting the road on the upcoming “The Most Wonderful Tour of the Year” this November and December, showing live and up close why they are rock music’s most exciting debut of 2022.

The five-piece act will play hit tracks from its debut album, Welcome To The Show, released June 24 via Better Noise Music, which has already racked up more than 2.8 million streams and drawn in a legion of fans clamoring for the high-energy, attention-grabbing rock music Classless Act creates.

The19-date tour kicks off November 29 in Dallas, TX, and continues through December 31 in San Diego, CA. Dates include headlining shows as well as appearances supporting Billboard chart-toppers Giovannie and The Hired Guns. The full rundown of dates appears below, and tickets are on sale now at https://classlessact.com/#tour.

The tour will commence just after the band re-releases their take on the Christmas classic “It’s The Most Wonderful Time of the Year,” coming November 11.

Also for the holiday season, Classless Act is giving listeners a different, unplugged take on five of the amped-up anthems that make up their debut record, launching a series of acoustic versions of the record’s hit singles, with a new song and video released every two weeks, culminating in a fiv-song collection, Welcome To The Acoustic Show, on December 16.

Seeing Classless Act live is a true experience where the talent of Derek Day (vocals), Dane Pieper (guitar), Griffin Tucker (guitar), Franco Gravante (bass), and Chuck McKissock (drums) really shines and will continue to do so on the upcoming trek.

BraveWords said they “sealed their place among hard rock’s new elite.” Splice affirmed, “While the band may be new, they performed like seasoned pros…Their music was filled with driving beats, big hooks, great guitar work, and equally as important tons of rock n’ roll attitude.” And Dread Music said, “Classless Act absolutely made their presence known as they served up high octane rock music on a platter to everyone in the park…I was a fan before they finished their first song. This band is another in the army of acts that are the future of rock ‘n roll, and I have no doubt that Classless Act will be out there headlining their own tour soon enough.” 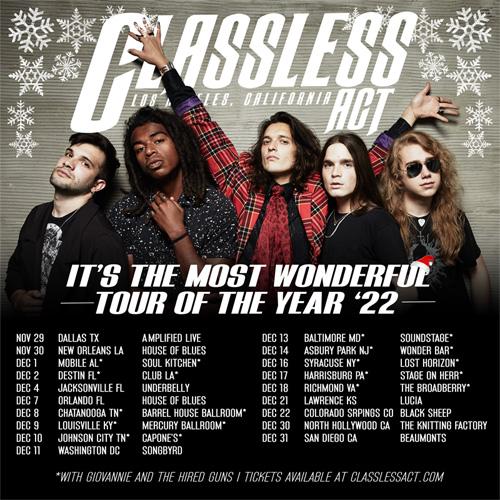 Support dates with Giovannie and The Hired Guns, and Classless Act headline dates are as follows: