Last here just before Covid hit in 2019 it’s not been the long seven year wait between visits that preceded their tour hit Australia, and tonight the Astor Theatre is packed with a great mix of punters, some who look old enough to have been there in the beginning, but many may not have even been there last time The Sisters released an album, after all it has now been 32 years since the glorious ‘Vision Thing’.

All that means little to the gathered masses tonight though as we run through the gamut earliest to latest creations. The guitars are loud tonight and the vocals somewhat lost in the mix but it gives the show of rockier edge than last time we saw them, it’s a mix that’s strangely compelling, more danceable and enticing. The setlist tonight is spot on too, a wonderfully constructed trip through time that takes in the oldest and newest material. It all starts off with the throwing down of teh gauntlet of brand new ‘Don’t Drive on Nice’ a track that only debuted this year in Europe and which is incredibly good. That insight into the present is followed by the sprightly 16 year old ‘Crash and Burn’ that also has had no official release. It’s a great way to start a set and prove that things are far from stale creatively even if Eldritch obviously thinks the album either dead or redundant. 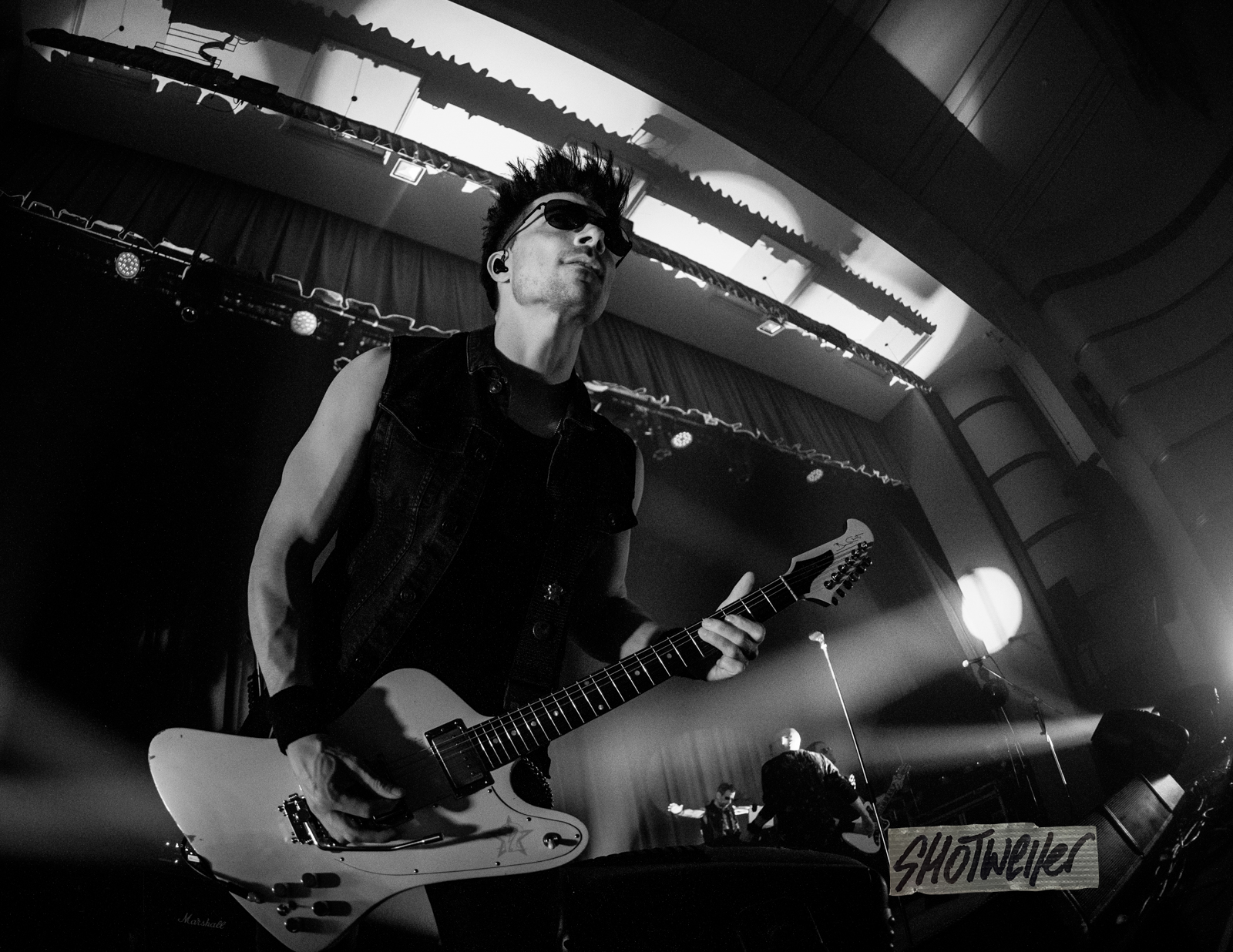 It’s down to ‘Ribbons’ from Vision thing to take a real first glance backwards before we’re back again in the present with the two year old ‘I Will Call You’. It’s an interesting gambit to essentially lead off with new material when the crowd’s only real reference to it are things like YouTube, and whilst I appreciate the standpoint I know there are a lot out there like me that sees nothing at all wrongs with the anachronistic pleasures of the CD and vinyl record.

If you’re old school like me you’ll know that a Sisters show is all about the atmospherics, earie glows of red and green cutting across dry ice whilst Andrew Eldrich strides and holds poses, at times he’s a red lit Nosferatu, like the one who holds ferocious poses against the crunching guitar on ‘First and last and always’ Next he’s green-lit for the wonderful new track ‘Genevieve’ with his microphone titled up and head back, it’s pure theatre.

‘Alice’ is simply divine tonight, it’s an almost understated version, and so fucking cool. and we get a green and yellow lit stage to herald the only Sisterhood track ‘Giving Ground’ which proves an audience favourite. There’s purple hues for the most Gothic song of all ‘Marian’ before we kick ahead a decade for the high energy and danceable  wonder that is ‘More’  I always loved that Steinmann infused hard rock natural progression that the Sisters embraced in the 90’s and today it’s just as inescapable. 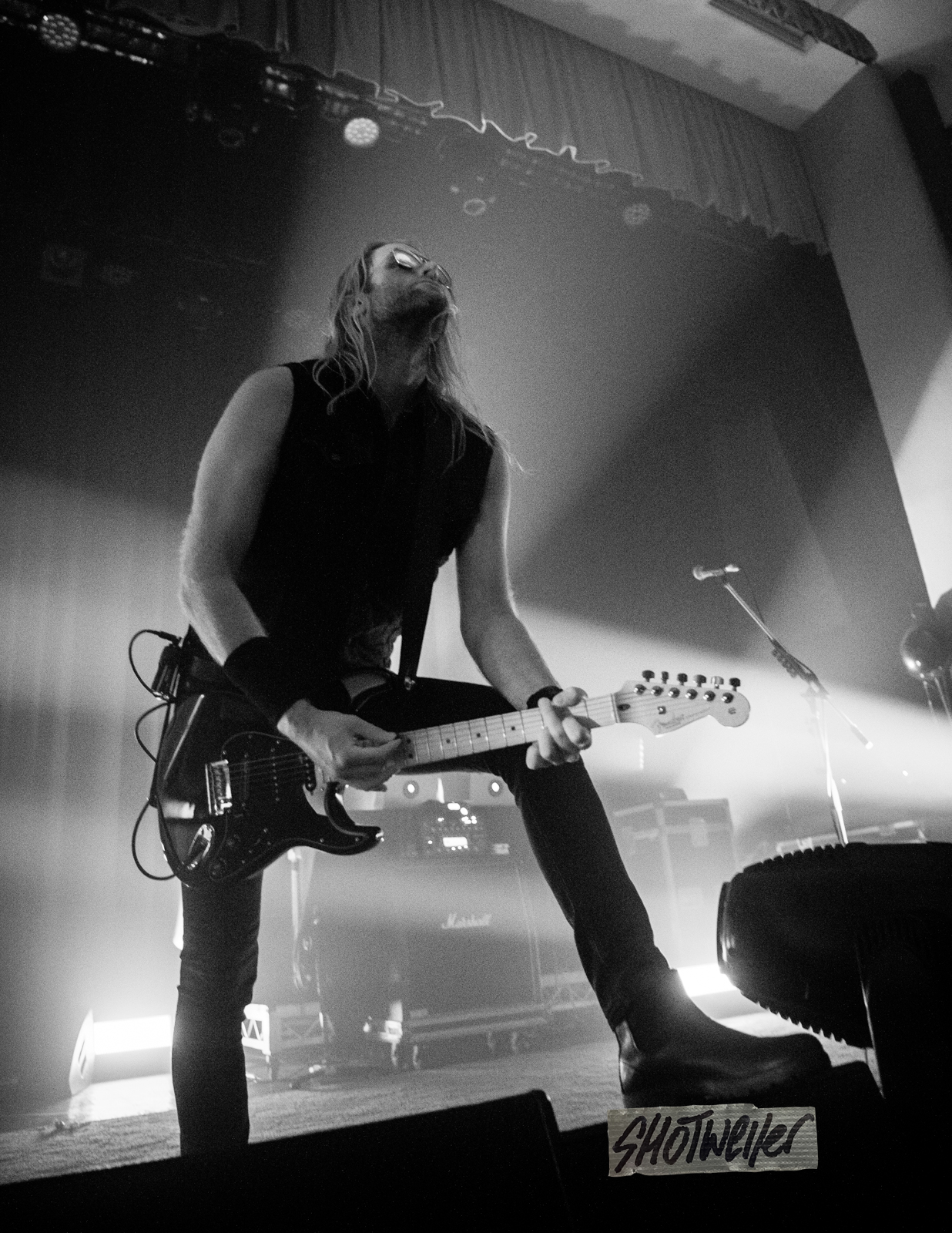 We see Eldritch almost dancing to next one, another song barely 6 years old the mellower ‘Show Me’ it’s a nice juxtaposition in the set between ‘More’ and ‘Doctor Jeep / Detonation Boulevard’, of all the new material tonight it’s the latest songs ‘Eyes of Caligula’ and ‘Here’ that are  most immediate to these ears. There’s not many bands of this vintage who can pull off placing so much new material in a set of tried and tested classics and not only get away with it but add to the overall experience but tonight Sisters do it with aplomb.

I’ve seen The Sisters many times over the decades staring off in my distant youth when they proceeded to blow me away, I loved the dark 80’s when it all seemed so right, loved the 90’s reinvention but whilst the intervening decades have always delivered on a live front I donlt think I’ve heard them sounding so vibrant and essential since those early days. Sure there may have been a lack of albums for 30 years but the new material tonight sounds wonderful and against such stiff competition I can’t help but leave the venue beaming from ear to ear.

That of course is not before the band, with the magnificent Ben Christo and Dylan Smith on guitars and the lurking Ravey Davey behind Doktor Avalanche have delivered the perfect encores – and we get not one, or two but three classics with the   simply stunning ‘Lucretia My Reflection’ heralding teh one that hooked me all those years ago ‘Temple of Love’ before ‘This Corrosion’ splits the night and ends what has been a rather wonderful evening. A joy! A dark joy! Thank you…