Kings of Leon may have taken over a decade to return to Australia for a full tour but the reception they received on the final night in Perth should have underlined why they should not leave it so long next time around. RAC Arena was buzzing tonight, everyone know the words to every song and no one left the Arena disappointed. Back in 2008 when they last graced our shores Kings of Leon’s ‘Only By the Night’ was the best-selling album of the year, last year their latest album ‘When You See Yourself’ topped the Australian charts.

Melbourne’s‘ The Temper Trap were a great choice for support tonight and really set the mood nicely getting the crowd swaying and singing with tracks like ‘Sweet Disposition’ and the lilting ‘Trembling Hands’. It’s a wonderfully textured set with plenty of energy set against more languid moments and whilst they go down well with the punters the huge swell of the crowd between sets sees Perth’s RAC Arena bursting at the seams before Kings of Leon take the Perth stage for the first time in over a decade. 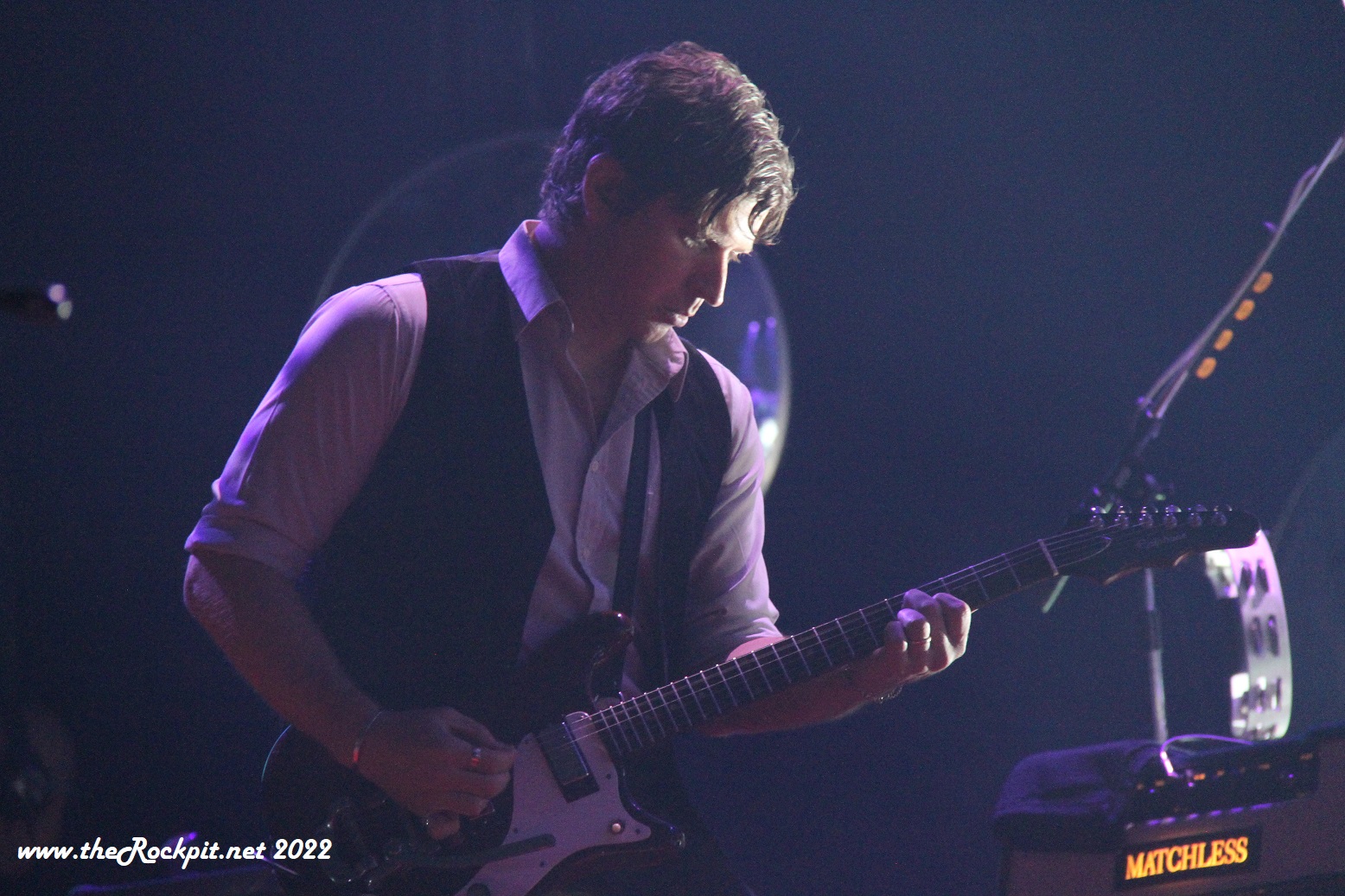 There have been three albums since Kings were last on a full Tour of Australia and after more expectation than you could possible measure, built by the stage cameras panning across the sea of faces in the crowd and picking out excited fans one by one, underlining the title of the latest album, the band finally amble onto stage and open with the main track from their latest offering ‘When You See Yourself, Are You Far Away’. The lights remain subdued as the first roar of the night is raised to the Perth skies.

A few days ago in Melbourne the banned donned Halloween make-up but tonight front man Caleb Followill and co let the music do the talking, taking us on a ride through those eight records (with teh notable exception of anything from ‘Mechanical Bull’) with a stage filled with smoke and mirrors , quite literally, with the smoke cutting through the lights which in turn reflect  back at the crowd.  From the off it’s clear that the Perth crowd is on point as they hurl back the words to the wonderfully balanced setlist that is studded early on with gems like ‘Slow Night, So Long’, ‘King Of The Rodeo’, ‘Taper Jean Girl’, ‘Revelry’ and ‘Manhattan’. 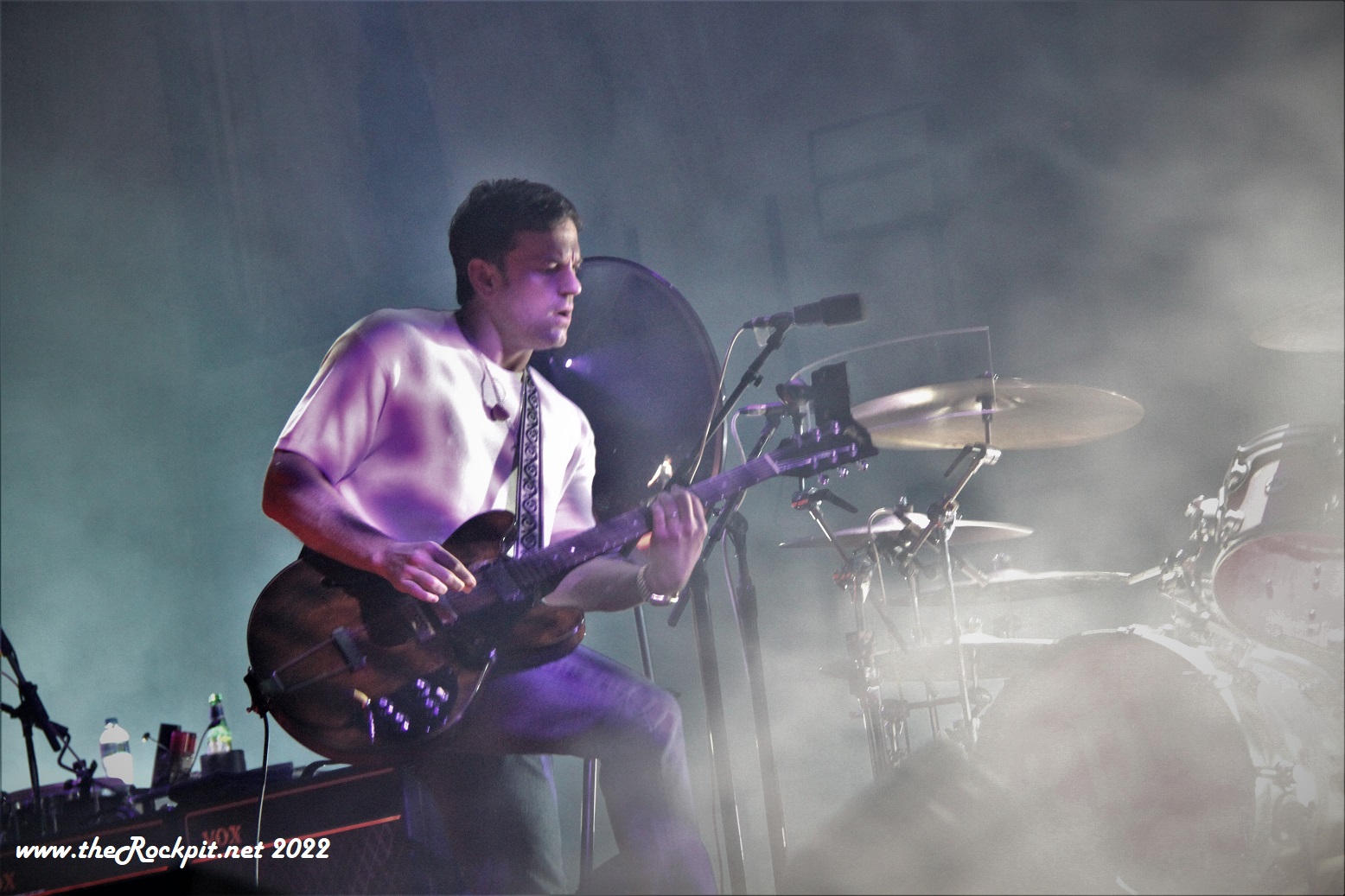 The fact that new songs like ‘The Bandit’ and ‘Time In Disguise’ are received with just as much love and vocal approval from the floor and walls of the arena proves that this is no fair weather audience!

With eight albums of material, it’s great to see that every album gets it’s time in the spotlight even digging all the way back to 2003’s ‘Youth & Young Manhood‘ for ‘Molly’s Chambers’ which resulted in a wonderful crowd sing-along orchestrated by Caleb, who communicates so well with so few words tonight, saying little until he greets Perth five songs in and announces that the band are going home tomorrow unless we want them to stay (The crowd seems to want them to delay that flight home), and checking how we celebrate Christmas over in the West!

Visually after that opening salvo the curtain at the back of the stage that has constrained the band and focused the crowd on the players falls away and the huge reach of the full set is revealed with huge screens backing the band and allowing close-ups for those all the way at the back of the packed Arena and also some wonderful brilliantly coloured visuals that seem to throb and pulse in time with the music, amplifying everything. 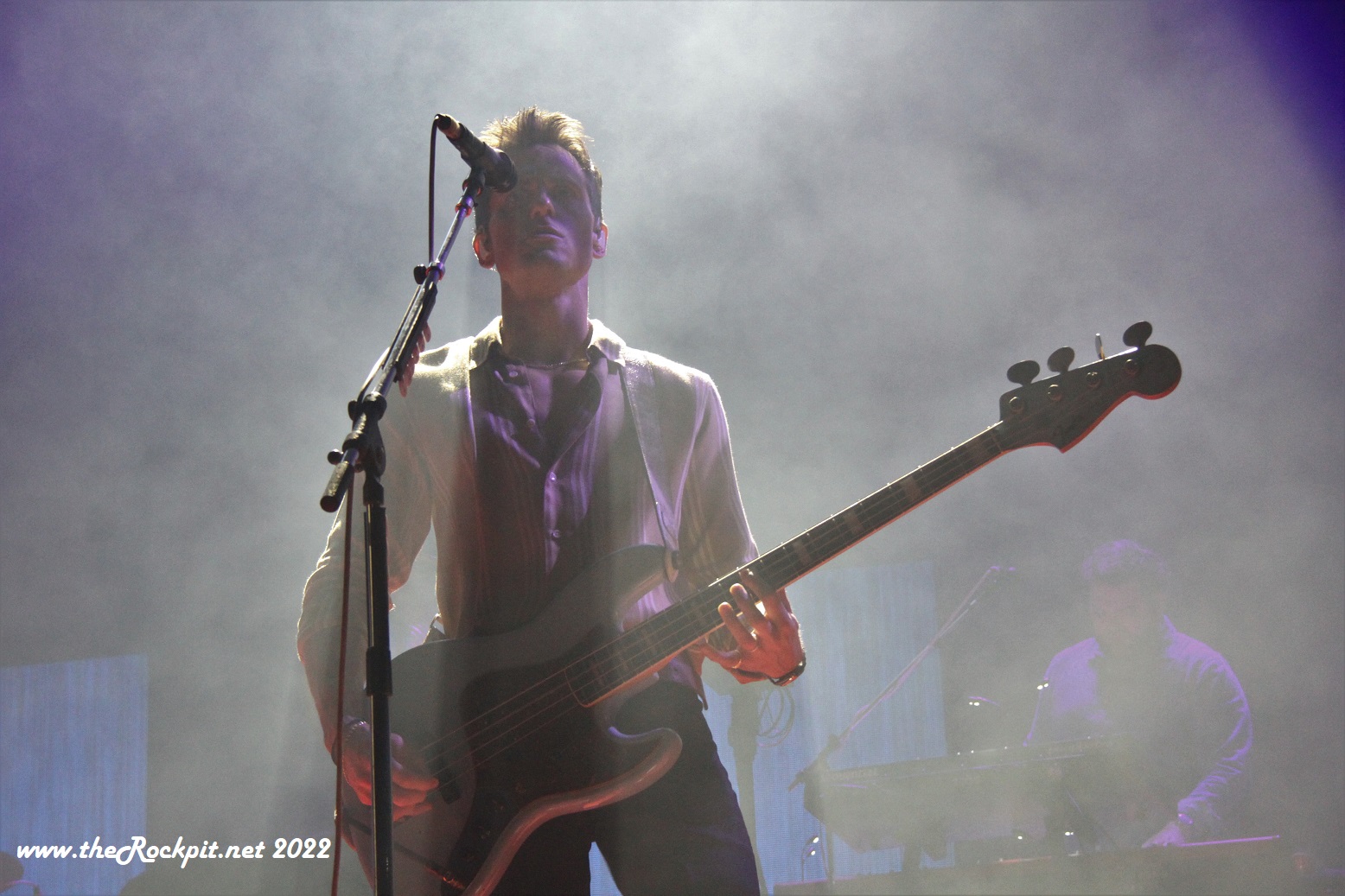 The thing that really grabs you as Kings of Leon take us on that journey through two decades of music is the energy in the room, I’ve rarely seen a crowd this immersed in a band, and despite the floor lit with the glow of phone screens taking snippets of the action, all of those screens are swaying, and all of those holding them, you can bet are dancing and singing along. On stage the tempo heats up further as we reach ‘Radioactive’ and Caleb, who has said few words ll evening asks Perth to dance. Perth does, and on stage the screens burst into colour, the spots flare out and the band underline why they can reach out to teh audience with just the music.

Caleb’s voice tonight is as good as it’s ever been, switching seamlessly between power and emotion with that distinct Tennessee drawl, whilst brother Jared attacks the bass precisely with his pick and Nathan pounds the drums like his life depends on it. It’s all offset by lead guitarist and fourth brother Matthew who brings it all together with his licks and pedals to prefect that sonic stew.

The sing alongs tonight are a real joy with ‘On Call’ and ‘Pyro’ getting the call and response treatment, though you could argue that every song tonight is a sing along and it’s patently obvious that Thursday will see a lot of tired voices across Perth. 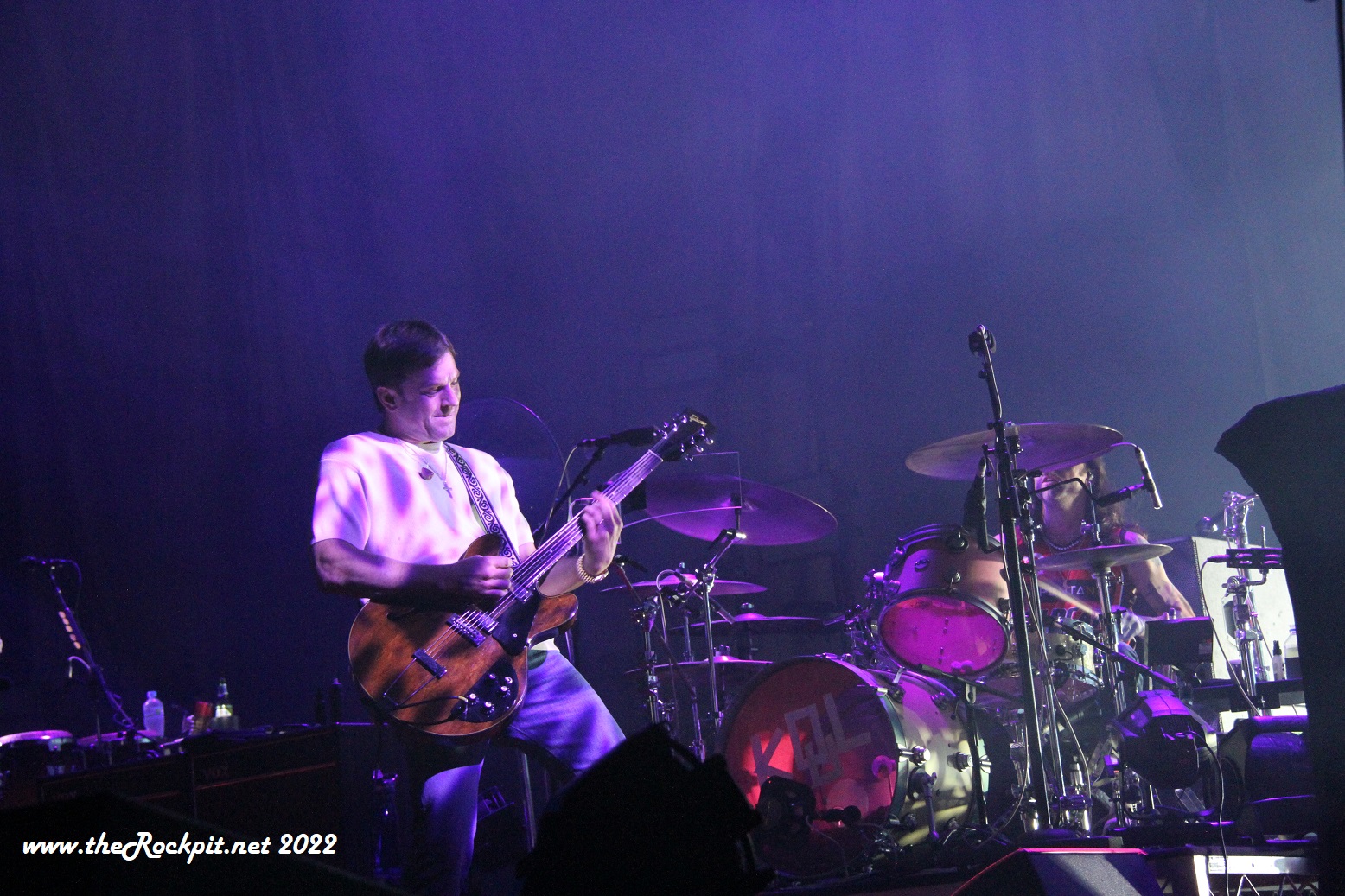 Downunder 2008’s ‘Only By the Night’ might be our favorite Kings of Leon album and so it’s only right that the night closes with a couple of huge moments from that record. The set proper is rounded out by ‘Use Somebody’ which sees the entire population of the Arena find another level to their vocal accompaniment before the band leaves teh stage for the first time to unrelenting calls for their return even before they have all left the stage!

The band returns for two encores, First there is the wonderful ‘Knocked Up’, which interestingly got its first ever live outing when Kings of Leon played Perth’s Subiaco Oval back in 2006, and which again sounds wonderful tonight. There could only be one closer though and Perth raises the roof as the first notes sound of ‘Sex On Fire’ which explodes from the stage making it impossible not to lose control of those lungs and dancing feet once again. As the tour credits roll after the band leaves the stage there’s not a single person in the Arena who won’t cherish this show until the next time Kings roll into town.