The woman who really does call the road home is delighted to announce her 18-date 2023 headline UK tour. Since she hit the scene, Elles Bailey has built an enviable rep as a live-touring artist and champion of live music, as well as recording hit albums, EPs and singles, not to mention earning multiple awards.

Elles’s natural habitat is live performance and touring. Small wonder that she called her sophomore album ‘Road I Call Home’, following her hit debut ‘Wildfire’. She has consistently built her rep within the blues and rock and americana genres, earning acclaim in each and all, year after year; not to mention award after award as one of the leading UK artists in her field.

In 2019, the Bristol-based Elles Bailey was regarded as one of the country’s hardest-working Blues/Americana singer, performing over 118 gigs in 17 different countries. However, along with everyone else in live music, her touring came to a halt with the COVID pandemic, lockdowns, enforced closure of venues and bans on mass gatherings.

As Elles herself has said, “March 2020 – they dulled down the splendour, silenced the show, turned off the lights, locked the doors & the live music industry was plunged into the half-light.”

Yet, despite the setbacks, the ever-resilient and independent Elles continued upon her upward trajectory, playing many online performances, winning Blues Artist of the Year 2020 at the UK Blues Awards, releasing singles for charity, and releasing a live album of one performance that, in 2021, was nominated ‘Blues Album of the Year’.

Towards the latter part of the year, Elles decided to finish her third studio. This album had originally been started in Nashville but, with travel now impossible, she decided to recut it with her fantastic touring band under the watchful eye of rock producer Dan Weller (best known for his long-term collaborations with Enter Shikari). ‘Shining In The Half Light’ earned Elles much acclaim, and thanks to her ever-loyal fanbase, the album not only soared to the top of the genre charts but also appeared on the RADAR of the UK’s main album chart.

It has indeed been an incredible year for Elles Bailey, who on the back of her album success has joined forces with Planet Rock to present a regular show on the high-profile British radio station.

She also stepped up to support some all-time living legends: bluesmeister Walter Trout on his recent UK tour, has just finished supporting Don McLean on his UK Tour (celebrating the 50th anniversary of the release of ‘American Pie’), and opened for the matchless master of Celtic Soul: Van Morrison.

“I’ve loved every minute of this year’s festival season,” says Elles, “It’s been fantastic taking some of ‘Shining In The Half Light’ — and of course the hits — back out on the road after so long and playing some incredible festivals appearances, but it seems surreal to think that although this album has been out since spring 2022, we haven’t done a full headline tour of it yet! So, I’m delighted to announce these UK dates, in support of this record of which I’m so darn proud! All the shows will be full-band shows and are also going to be celebrating the incredible musicians on this album!

Elles adds, “It wasn’t easy self-releasing, on the back of a pandemic whilst juggling touring and motherhood as well, but my fans showed me how just incredible they are, and got this record right to the Number 1 spot! Now it’s time to take the show on the road, support indie music and keep music live!” 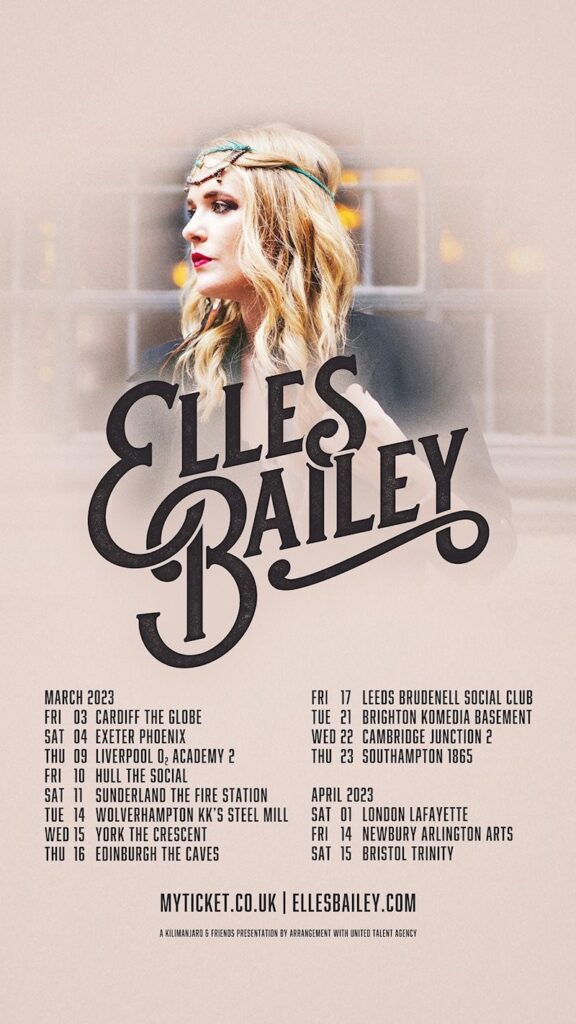