HARDLINE MEDIA are proud to present, direct from Canada, the mighty, the legendary, the Metal pioneers… ANVIL!!!

Touring their latest release “Impact Is Imminent”, out now on AFM Records. ANVIL are heading down under for 5 shows in 5 days in 5 states!!! CANBERRA, ADELAIDE, MELBOURNE, BRISBANE and SYDNEY, Impact is definitely Imminent!!!!

Having released 19 Studio albums in their career, including influential classic titles like “Metal On Metal”, “Strength In Steel”, “Pound For Pound”, ANVIL have stood the test of time in their 40+ years. Influencing some of the biggest names in the music industry, with Icons like Lars Ulrich of Metallica, or Slash from Guns ‘N Roses, and countless others, raving about the band, as seen in their hit documentary “Anvil: The Story Of Anvil”. This band has always been a constantly touring, constantly recording, powerhouse Metal band that always put on one hell of a show!!!

Their latest Metal album “Impact is Imminent”, which has ANVIL, as usual, fire off merciless riff attacks, relentlessly driving drums and impressive bass grooves, complemented by vocal melodies and lyrics that inevitably drill themselves into the listener’s aural tract.

As always, Steve Kudlow and drummer Robb Reiner, are at the epicentre of this Heavy Metal extravaganza. For the past eight years, these two have been supported by bassist Chris Robertson, who not only complements the ANVIL fold on a personal level, but also enhances the tracks with his powerful low frequency bass parts and backing vocals, which have brought polyphonic vocals back to ANVIL’s music.

Check the video “Take A Lesson” from their new album, with none over than DAVE GROHL introducing the band:

Together Lips and Robb Reiner, joined by bassist Chris Robertson, invite you for a night of METAL when they hit Australian shores in February 2023.

LIMITED VIP meet and greet with ANVIL, includes:
– Early access to the show and merch stand
– Get a photo on your phone/device with ANVIL
– Australian tour poster to get signed by ANVIL
– Exclusive VIP lanyard/laminate
– Bring along 2 personal items to get signed.
– VIP TICKET INCLUDES ENTRY TO THE SHOW.

EXTREMELY LIMITED PRE-SALE ON TUESDAY 4TH OCTOBER @ 10AM at www.hardlinemedia.net where you pay no booking fees, so save some bucks…
The Early Bird catches the Worm.
Once these have gone, pay full price on Thursday 6th October 10am, via the Venue or www.hardlinemedia.net 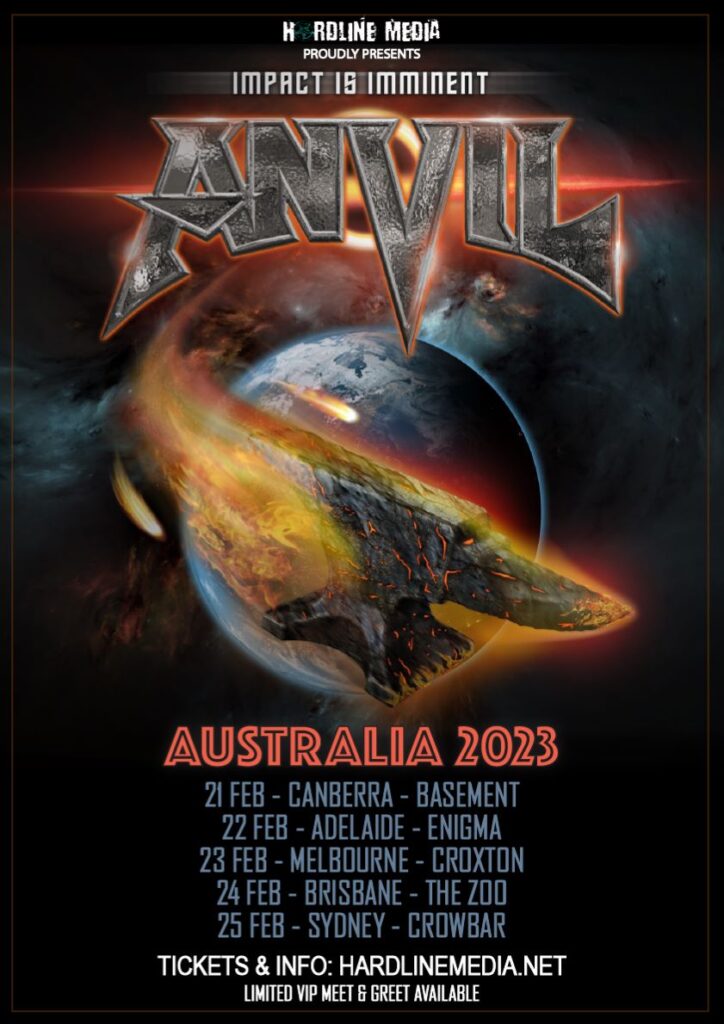