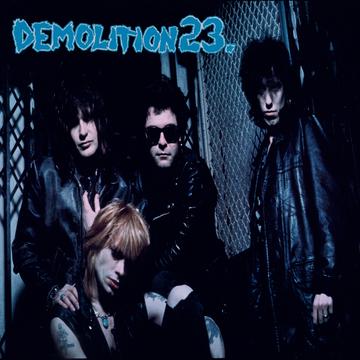 This is the Punk that inspired bands like Hanoi Rocks and the raw sound you will love – an absolute underappreciated gem.

After Hanoi Rocks broke up in 1985 Monroe looked at starting a solo career, but before that kicked off one of the first things he did was work with Stiv Bators on backing vocals for the Little Steven song ‘Sun City’ that they recorded in London and then flew over to New York to appear in the video. Monroe shortly after relocated to New York City founding a new solo band the year after before recording his debut solo record ‘Nights are so Long’ in 1987. I always wondered about that relocation, with Michael being so in tune with London and the rich scene there.

A few years later in 1989 came ‘Not Faking It’ on Mercury, a record that featured the likes of Axl Rose, Ian Hunter (Dale Griffin and ‘Overend’ Watts also of Mott The Hoople had previously produced Hanoi’s ‘Back to Mystery City’) Little Steven as well as old Hanoi colleague Nasty Suicide. A couple of years touring the record didn’t make as much impact as hoped and in 1992 New York based Monroe went on to form Jerusalem Slim with Steve Stevens after appearing as a guest on Gunners new records.

Jerusalem Slim seemed good on paper with Billy Idol’s stellar guitarist complemented by ex-Hanoi Rocker Sam Yaffa on bass as well as session legend Greg Ellis on drums and even the legendary Ian McLagan of the Faces and Small Faces on piano but the album didn’t work out and Monroe and Stevens’ musical disagreements ended the band.

Next came the band who produced this gem – Demolition 23 which Monroe formed with guitarist Jay Hening who had just left New York Glam Punks Star Star after ‘Go Go Girls in Love’ and ‘The Love Drag Years’ (and album I already had) they were joined by Yaffa and Jimmy Clark on drums. Hening was eventually replaced by Nasty Suicide making the band 3/5 of Hanoi Rocks. After tours in Europe and Japan including the London date I saw at the Astoria in 1994 when the band was absolutely on fire! They split shortly after when Suicide announced that he would be retiring from the music business.

All we were left with therefore were the memories and a great Sleazy Punk record that mixed some wonderful originals with a smattering of well-chosen covers. It’s one of those rare albums that is just perfect. It perfectly captures the spirit that drove Monroe and the Hanoi Rocks and sees Monroe already writing in glowing terms about the wonderful days of early 80’s London when everything was possible and the nights never ended.

Initially Demolition 23. were a covers band and it’s probably one of the reasons why the cover songs on here are so damned perfect. Live in New York they played up a storm and were joined on stage by everyone from Kory Clarke or Warrior Soul and Sebastian Bach (then still of Skid Row).

Recorded at Power Station Studios in New York and produced and co-written by Little Steven ‘Demolition 23.’ is a classic and the prefect mix of giving a nod to the inspirations – there are covers of songs by Johnny Thunders, UK Subs and The Dead Boys here and creating something wonderfully Punk and new. The album itself is dedicated to Michael’s great friend and inspiration Stiv Bators.

For me Demolition 23. is one of the great records of the 90’s and it opens with four of the very best – first the punky bass driven ‘Nothings Alright’ that sounds just like the Hanoi Rocks meets Sex Pistols, with Mike spitting out lyrics of a disenfranchised 60’s, 70’s or 80’s youth and the band filling in perfectly.

‘Hammersmith Palais’ that follows is just pure and simply one of the best songs I have ever heard and one of Monroes’s greatest moments – a song that perfectly captures why certain moments on time are so priceless to us all. The refrain and verses are simply perfect and I never cease to smile when I hear the song even almost 30 years on. We all have our own ‘Hammersmith Palais’ it’s a song that makes you glad to be alive!

‘The Scum Lives on’ is incredibly poignant and so utterly insightful. It’s also another great song that lyrically is inspired by the loss of our idols whist as you imagine ‘the scum lives on’.  Listen to the name-checks- you don’t have characters like these anymore, though sadly you do have a deluge of characters that would fall into the ‘scum’ side of the ledger.  The fourth track ‘Dysfunctional’ is a Stooges fueled stomper of a song that rounds out a wonderful opening with something a little more elemental – it’s sheer Rock and Roll and Monroe’s harp and the searing guitar just underline that.

The first cover song on the album – the Dead Boys ‘Ain’t Nothing to Do’ is an inspired take on the song about youthful futility and boredom, and whilst it might not be as savvy as the originals here it’s easy to see how bands like the Dead Boys were such an inspiration for Monroe and Hanoi. Johnny Thunders’ Heartbreakers ‘I Wanna Be Loved’ is one of my favourite Thunders originals – a cracking song where the ex-New York Dolls main man hit his punky Rock and Roll peak. It’s just a great song that gets right to the point.

The longest song here – the mid-tempo ‘You Crucified Me’ is in any ways the odd one out, a mid-tempo exploration of heartbreak set with biblical references it’s an odd song lyrically and one that as far as I am aware was never played live. ‘Same Shit Different Day’ takes us back on track. It’s a glorious disenfranchised Punk Rocker that lyrically is certainly related to the Dead Boys earlier workout but lyrically embellished like only Monroe can do with wonderful little details. It’s a gang vocal ‘made to be played live’ Rocker that never gets old.

The final cover of the U.K. Subs ‘Endangered Species’ is a faithful rendition of the classic; and closer ‘Deadtime Stories’ wraps it all up perfectly with a gentle ballad led by acoustic guitar and Monroe’s emotive voice. To me this was always the song that connected the album to his solo work and Hanoi. It’s a song I can never tire of. This re-release includes three demos of ‘Hammersmith’, ‘Dysfunctional’, and ‘Scum’ – they’re quite an eye opener for anyone that saw the record as raw and rough edged and they really do show you what Little Steven brought to the mix.

I always wondered what it would have been like if instead of the covers here we’d got a few of the songs I heard that night I saw the band, if I remember rightly we got the classic MC5 ‘Kick Out the Jams’ as well as The Stooges’ ‘1970’ and I Got a Right’. I also seem to remember two non-album originals being played when I saw them the first was called ‘Love Song’ and the other was called something like ‘What Love Is’ though I have no idea if either was ever recorded even as a demo? Those are two tracks I’d love to have seen on this expanded release.

For those that know how the story ends after the release in March 1995, Nasty Suicide left the band much to the surprise of Michael Monroe. Michael then ended the band… and there we have it up until 2022 when they reform for just one show to play Mike’s 60th.

They leave us with a perfect record for a moment in time that still sounds essential today.